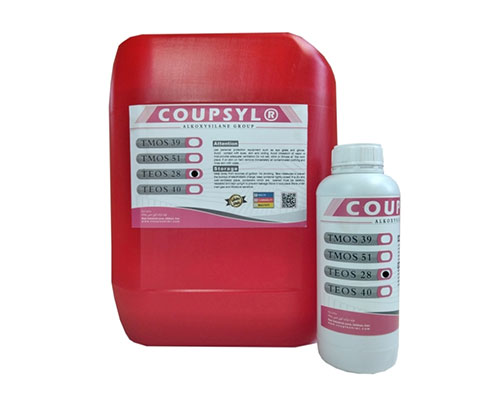 Tetra ethyl ortho silicate, also known as tetra ethoxy silane , is a flammable, colorless liquid with a medium boiling point and low viscosity. Ethyl silicate has a pungent odor similar to ethanol and is toxic. It also dissolves in alcohols and most common solvents and is rapidly hydrolyzed and degraded in contact with moisture to form silica powderand releasing ethanol alcohol.

As mentioned above, this material has many uses, some of which are mentioned below.

As a hardener for silicone adhesives and resins

In the restoration of historical buildings and waterproofing of building surfaces

Tetra ethoxy silane or methyl silicate should be stored in the main container in a sealed state in a dry and humid environment at a temperature of 10-30 ° C to prevent evaporation and hydrolysis. In case of contact with skin, wash immediately with plenty of water. See a doctor if swallowed. This substance is flammable and its vapors are toxic.

Tetra ethoxy silane can be stored in plastic or metal tanks. This material should be kept away from flame or spark sources. This product is offered in 20 and 200 kg plastic tanks. Due to the absorption of moisture, barley should be kept in the main containers as a seal.

Online support
Start a conversation
Hello! Click on one of our members to chat on Whatsapp
The team usually responds after a few minutes.
coupleshimi